We are located at:

The competition is run at the Under 13, 14, and 15 age groups, following normal sevens rules. The Tournament Rules and Club Information are given below.

At U14 and U15, where there are three pools, there is a Cup, Plates, and Bowl competiton.  At U13, with two pools, there is Cup and Plate - in accordance with RFU regulations on tournament at U13 all sides will at least reach a semi-final.

Where there are three pools, the bonus point system will be used to identify the best-second-place team, which will join the pool winners in the Cup, and the same process will identify the next four-placed teams, who will contest the Plate, and the last four in the Bowl.

The entry fee per team is £30, but there is no spectator entry fee. 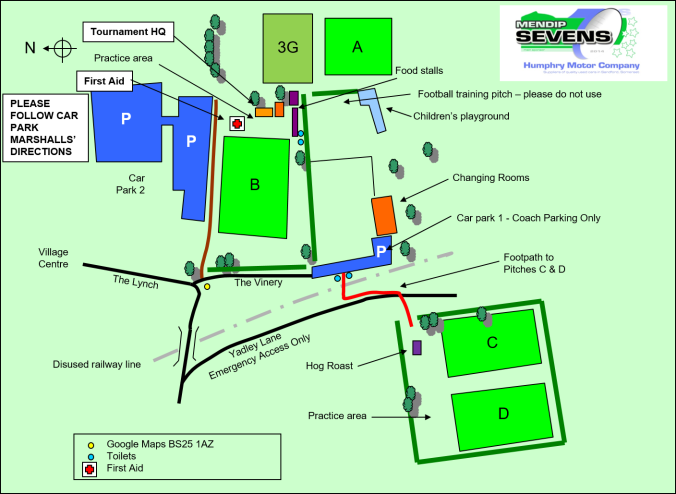 1. The Laws are those of IRB Rugby Sevens as modified by the Under 19 requirements of the RFU.

2. Matches  will be played five minutes each way, with a two minute break at half time.

3. Conversions will be taken by drop goal and MUST be taken from THE FAR SIDE of the posts, in-line with the point of the try scored.

4. Squads for U14 and U15 will be limited to fourteen players; however, the organisers reserve the right to waive this rule in the case of the second teams, especially for touring sides.  There is no squad limit for U13s.

5. Any team more than 5 minutes late for their appointed kick-off time will be adjudged to have lost that match by 30 points to nil.

6. There will be two or three Pools for each age group.  In the case of two pools, the top two in each group will go on to contest the cup semi-finals, and the third and fourth placed sides will contest the plate semi-finals.  In the case of three pools the bonus point system will be used to assign rankings.  In the event of teams not attending or other unforeseen events, the organisers reserve the right to change the structure of the competition.

7. In the Pool Stage, four points will be awarded for a win, and two points for a draw. Any side that loses by any margin of 7 points or less will be awarded a bonus point, as will any team that scores more than 25 points in a game, although only one bonus point will be awarded to any one team for any one match. Final positions will be determined initially on pool points scored, then on match points scored, match points difference, the result between the two sides in question, tries scored, and if the teams still cannot be split, the toss of a coin.

9 . In the event of a draw in the Final, two minutes each way of extra time will be played.If the teams are still tied, the two sides will be declared joint winners.

10. Referees will award up to five Fair Play Points per team in each game in the Pool Phase, anda Fair Play Award will be given to the team with the highest number.

11. The referee has absolute discretion over the safety of playing apparel.If an item is disbarred there is no right of appeal.

12. If any player is ordered from the field of play for disciplinary reasons, he may be replaced but may take no further part in the tournament.The referee may not award the affected side any fair play points for that match.

13. In the event of any dispute whatsoever, the decision of the organiser and the Winscombe RFC Mini & Junior Chairman will be final.Decisions taken by referees will be supported without question